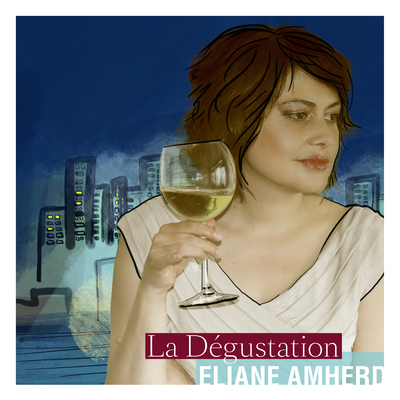 Jazz, Latin, Brazil, ..., Valais – Singer, guitarist and songwriter Eliane Amherd is a true cosmopolitan artist: Born in Switzerland, she lives in New York, and it is that city’s... Read Biography

Singer, guitarist and songwriter Eliane Amherd is a true cosmopolitan artist: Born in Switzerland, she lives in New York, and it is that city’s savvy multicultural energy that most influences the unique sound of her original compositions: jazzy, groovy and rooted in African, Brazilian and Latin music. Inventive, enchanted yet earthy. Amherd is an equally talented composer/lyricist whose words and music are as refreshing as the air of the Swiss Alps where she was raised.

Her albums “Now and from Now on” and "Skylines" which are broadcast internationally, continue to receive great press reviews and have topped the play list of several US Radio Stations. Eliane also arranged and produced the Swiss Miss Sampler “heimweh”, featuring reknown Swiss artists like Eliana Burki, Nubya, Gigi Moto, Corin Curschellas, Mia Aegerter etc. This recording has earned her many great press reviews, interviews on Swiss national radio stations and an appearance on the popular Swiss talk show "Aeschbacher".

Eliane's original songs can be heard on the Netflix series "An astrological guide to broken hearts", on the award winning web series "Constance Cooks" and the award winning movie “Approaching Union Square” by filmmaker Marc Meyers. She plays guitar in the Pacha Massive video “don’t let go“ on MTV, appears on the Swiss National TV SRF production “A Night at the Apollo” and her voice is featured on Jeremy Mage's song "Slippery Light" which aired on the NBC hit TV series "Lipstick Jungle".

Eliane plays at Embassy's around the globe and entertained companies like Bvlgari, Time Warner Cable, C.F. Bucherer, MySwitzerland Tourism and major events, e.g., the World Expo 2015 in Milan, the Soiree Suisse at the Swiss Embassy in Washington DC, the reopening of the Silverstein Building at the World Trade Center (alongside Lou Reed, Susan Vega, and the Brazilian Girls), the opening of the Swiss Business Hub in Hong Kong and the Swiss candidacy for the United Nation Security Council in NYC.

Eliane plays guitar in different NYC bands like "As Lolas” ( Brazilian psychedelic 70ties Rock ) and “Dawn Drake & ZapOte” ( Global Funk ). She has worked with greats such as Randy Brecker, Marcus Strickland, Bashiri Johnson, Bill Ware, Hagar Ben Ari, appears on many albums of fellow musicians and DJ’s as a featured singer or guitarist, and performs with the best musicians NYC has to offer.

Registered since about 14 years
Last login on 31 October 2022