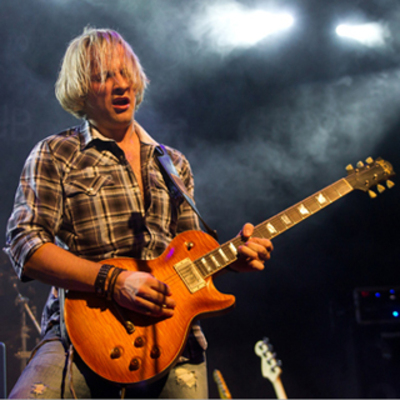 Canadian-Swiss blues-rocker Fabian Anderhub is ready and raring to release his third album „Make The Change“ – an explosive mix of uptempo rock tunes with a blues touch, heartfelt ballads and brilliant compositions, featuring one of the most promising upcoming artists to surface in the blues and rock genre. Anderhub’s love for the blues has enabled him to keep an open mind and heart for other styles and concoctions that take their rightful place within the songs and sounds produced by this very talented artist who, at 31 years of age, has very much remained young at heart – both as a human being and as a well-versed and seasoned musician. With a handful of carefully selected musicians who shall accompany him on his future musical journeys, Fabian Anderhub presents his latest collection of catchy, powerful and blues-driven songs with a deep rock’n’roll attitude: „Make The Change“ is set for release in January 2013.

„Blues has so many different facets. My music is always a reflection of my own personality and the current situation I am in. A reflection of my thoughts and my feelings, so to say.“ Swiss-born guitarist and singer Fabian Anderhub also lived in Canada for a long time where he has a loyal following. Canadians are well known for being highly sociable, open-minded and easy-going. On the other hand, the Swiss are famous for their hardworking, discreet and precise nature. Now, this may well be conceived as a prejudice. But having met or seen Fabian Anderhub, any prejudice whatsoever immediately becomes superfluous. Anderhub is definitely a true-to-the-heart symbiosis of these two most fascinating countries and cultures.

On stage, Fabian turns into a livewire and energetic performer. He cleverly meanders between a variety of musical genres, during the course of which – either in his own penned tunes or in cover versions – he always puts his own stamp on the music he delivers. And Fabian Anderhub has proven time and again that he is able to deliver in any given circumstance. For example during a lot of Canadian tours, support of British rock giants Wishbone Ash(European Tour 2012) when he completely won over a critical audience that was blown away with the magic of Anderhub’s voice, guitar playing and songwriting skills. And this is exactly what he loves – rousing the crowds with his own special style of the blues, incorporating influences from genres such as funk and rock.

For more than a third of his life, Fabian Anderhub lived in Canada where he has become a household name on the blues-rock circuit. „At the age of 14, my family moved from Lucerne to Canada where I stayed until I was 25. Ever since, I’ve commuted between these two very different worlds. At heart, I am Canadian – but at the same time I am still very proud to be Swiss“, he explains with a broad and characteristic smile on his face.

Backed by a group of well-known and experienced musicians, Fabian Anderhub is now preparing for the release of his brand-new album „Make The Change“ !!!