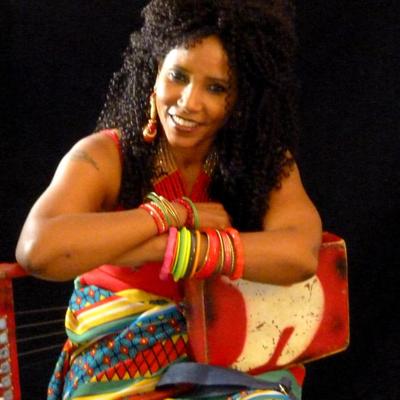 Eritrean music, Vaud – Faytinga (born Dahab Faid Tinga) is a prominent Eritrean singer and musician. She comes from the Kunama people, one of Eritrea’s many tribes, where... Read Biography

Faytinga (born Dahab Faid Tinga) is a prominent Eritrean singer and musician. She comes from the Kunama people, one of Eritrea’s many tribes, where women and men have equal rights. Born in 1962 she joined the liberation struggle at the age of 14 where she was given education and become a combatant until the liberation in 1991. Her mother grew up in the highlands of Eritrea, while her father Faid Tinga Longhi was a hero for the Kunama people.

She toured for the 1st time as a solo artist in 1995 after releasing her first album ‘Sala Da Goda’ on tape. She won the 2nd prize and 1st East African women singer at the 2000 Ma’ Africa in Benoni, South Africa. It took until 1999 and an appearance at the Africolor festival in France, before she could record her second album ‘Numey’. All of the songs on this album are in Kunama. In 2003, still finding her inspiration in Eritrea’s musical tradition with krar and wata, she also brought guitar, flute, and percussions in her 3rd album ‘Eritrea’.

Faytinga has been performing around the world representing Eritrea as a 'cultural ambassador' for her country. She participated to Expo 2005 in Aichi, Japan and to Expo 2010 in Shanghai, China. She also attended the Earth Summit 2002 in Johannesburg, South Africa. She has been collaborated with other artists and her vocals are featured in many recent DJ mix.

Faytinga is one of the first Eritrean artists engaged in support of people living with HIV & AIDS and global action to protect the planet.

Registered since about 1 month
Last login on 3 November 2022