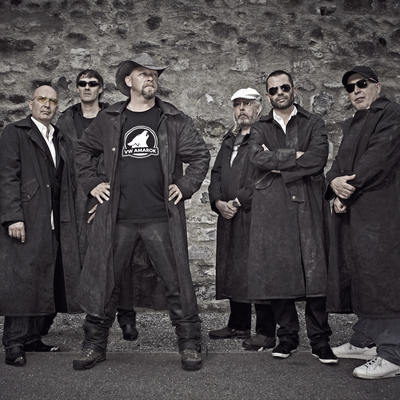 Rock, Bern – GÖLÄ feat. The Deed – an amazing Rock‘n’Roll adventure. Swiss-Rockstar Gola and his band founded „The DEED“ 2010 and recorded “Hour Of The... Read Biography

Swiss-Rockstar Gola and his band founded „The DEED“ 2010 and recorded “Hour Of The Thief”, an album of urgent thought, provoking hard driving music with classic roots and cutting edge sound that is steeped in the influences of the greatest Rock‘n’Roll.

In the person of Charlie Midnight, The DEED had a world renowned producer/songwriter who has produced and written songs for more than 30 films including Rocky IV, The Bodyguard, Bull Durham, Lizzie McGuire, Ruthless People, Burlesque as well as for notable artists such as Billy Joel, Joni Mitchell (a duet with Seal), Britney Spears, Christina Aguilera, Barbara Streisand, James Brown, Joe Cocker, the Doobie Brothers, Cher, Hilary Duff, Jimmie Barnes and many more… And to ensure that, in the mix, the integrity and uniqueness of the music would be preserved, Charlie Midnight went to Mark Needham, the mixing legend whose mixing credits include, amongst others: Fleetwood Mac, The Killers, Chris Isaak, Shakira, Michelle Branch, My Chemical Romance, Stevie Nicks and Lindsey Buckingham.

The DEED is defined by its unforgettable melodies, lyrics with depth, unique sound and its charismatic lead singer, „Gola”.

Gola is one of the best-known Swiss artists and has enjoyed unprecedented success in Switzerland, including the best selling Swiss album in history; sold out arena concerts; and a world music award. He is recognized as the ”working class poet“ of Switzerland and his recordings consistently find their way to the number one position on the Swiss album charts, with most of them being multiple platinum-certified.

In 2010, “BB&G – The Greatest His Sessions”, an amazing collaboration with the worlds famous Bellamy Brothers spent six weeks at number one on the Swiss album charts selling double-platinum in the first five weeks. The BB&G tour with 10 shows in Switzerland was sold out in no time.

Gola, his manager and a film and photo team went on a “The DEED” Australian promotion tour 2011. It took them 22.000 km and six weeks by car visiting every radio station, tv studio and news desk crossing their way. This spectacular trip was very effective and The DEED were on several radio playlists, in tv shows and newspapers around the country. Purely accidental Gola and his team went into the Australian super star Jimmie Barnes, who has worked with Charlie Midnight for a duet on „Hour Of The Thief“, but never met up with Gola personally before.

The DEED: an amazing adventure with thousands of memories, pictures and hours of video footage and an incredible album… …but nevertheless, due to many other projects of Gola the awesome The DEED album “Hour Of The Thief” was not released until June 2020.