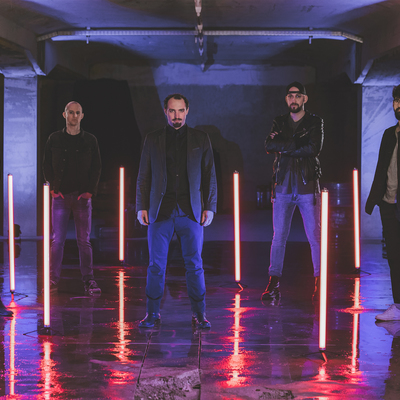 Lush guitar riffs and energetic, gloomy synthesizers alternate with delicate, hopeful piano sounds and refined string arrangements. Always there: the big, catchy melodies and polyphonic choirs.
Gion Stump & The Lighthouse Project are a live experience, whether in a small club or on the big open air stage. With a lot of charisma and irrepressible energy, the five musicians from St. Gallen fascinate the audience at their shows with their typical, varied mix of humorous, profound lyrics and melancholic, sometimes dark, but always confident songs straight from life. This captivating mix is also promised by the songs on the new album - from danceable, bombastic electro-rock anthems to intimate piano duets.

After three albums and concerts all over Europe, the five guys from St. Gallen return in 2022 with the new album "A Penny for the Fool". Highlights of the band's more than 10-year history include concerts at the Gurtenfestival Bern or at the SummerDays Festival Arbon, as well as the top-30 placement of the album "Holy Darkness".

On their fourth studio album, "A Penny for the Fool", they leave the darkness, which they still explored on the previous album "Holy Darkness". "A Penny for the Fool" searches for the boundaries between life and death, this world and the next, and finds itself somewhere between heaven and hell - on earth, in the midst of life. Amidst the chaos of the world, the protagonists long for order and explanations.

"A Penny for the Fool" was recorded in 2020/2021 at Powerplay Studios (Maur, CH), the band's own The Lighthouse (St. Gallen, CH) and Hat Creek Recording Studios (Tennessee, USA). In collaboration with Marc Carolan (Muse, The Cure, Snow Patrol), Dave Hofmann (Egopusher, Leech) and Randy Merrill (Paul McCartney, Lady Gaga, Muse) an album was created with many big songs, but also with intimate sounds. The visual realization of the new album is provided by the long-time band director Sandro Horber and the Parisian photographer Marilyn Mugot.

Registered since over 15 years
Last login on 17 February 2022