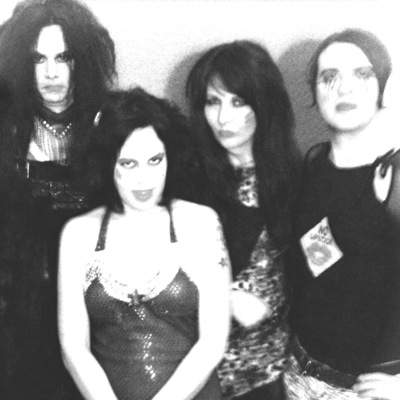 GUTTER QUEENS call themselves ROCKSCHLAMPEN and stand out dazzlingly from the Swiss music scene. With massive charm, glitz and glamour they redefine GLAM ROCK. Their own refreshing mix of 70s GLAM, 80s SLEAZE and a good shot of PUNK ROCK reminds us of the days when ROCK'N'ROLL was still dangerous. Live a special treat - her wild stage show, glamltastic outfits and an untamed ROCK N ROLL doesn't leave any eye dry and no leg still.

The latest release of the GUTTER QUEENS is the beautiful 12" vinyl I.O.U. On the A-side three new songs and on the backside the long sold out but still desired Singles. Besides several demos they released the two records HOT IN HOLLYWOOD and VIVA LAS DIVAS, which were sold out shortly. They are also a welcome guest on national and international compilations - from Winterthur to Japan, from U.K. to U.S.A.

They have a considerable media presence - this includes various TV appearances, radio shows and interviews as well as reports, interviews, recessions in the daily, weekly and of course the music press. It is not uncommon to draw comparisons to bands like STOOGES, HANOI ROCKS, CRAMPS or NEW YORK DOLLS, who have had a certain influence on music and image. If they are asked about further influences, the answer is: TURBONEGRO, MÖTLEY CRÜE or even GUNS N'ROSES. The GUTTER QUEENS take the best from music history, give it a good kick with their own style.

"Eight glitter stars for HOT IN HOLLYWOOD!" Heavy or what?