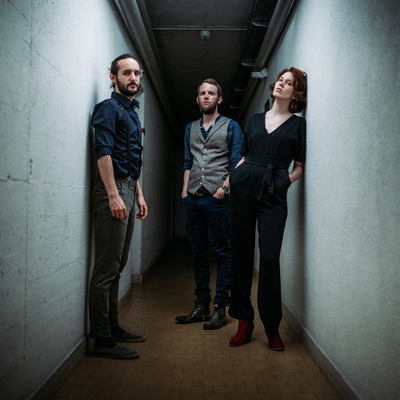 Avantgarde Folk Punk, Luzern – After a few pints of Guinness and an evening of singing along Queen songs in the honourable Roisin Dubh in Galway, Hendricks the Hatmaker has been... Read Biography

After a few pints of Guinness and an evening of singing along Queen songs in the honourable Roisin Dubh in Galway, Hendricks the Hatmaker has been lifted from its cradle. Renato, Nicolas, Stefan and Roberto managed to combine each their preferences of music and well… Gin.

After their acoustic-folk based start in 2013, their 2016 released Album “Songs for the Confused” is much more than just a collection of campfire sing-along ditties. It’s honest, it’s ecstatic, it’s alive, it is Hendricks the Hatmaker.

The band from Lucerne (Switzerland) is probably best described as Folk-Punk. Their songs depend on a powerful acoustic guitar and a weathered voice that carries the melodies. An electric guitar delivers both, delicate melodies (Walk Away, Postcard) or a huge guitar-wall (Spilled drinks and lost causes).
All members except for Renato played in the same Pagan-Death Metal band “Abinchova”. A lack of rhythmic drums or proper bass lines is therefore not to be expected: the spectrum of the band reaches from laid-back tunes (Walk Away/Punks & Politics) to proper rocky earworms (Supertramp/Raise and Cheer) or punk songs (Confession of a Drunk). Friends of old-school Singer-Songwriter will get their money’s worth as well: Honest and unadorned tracks (Ten long years) are a part of their repertoire as well as acoustic pieces with the whole Band (Kali). And of course, a mandolin (Music/Raise and Cheer) and a banjo (Walk Away) are not missing.

Put your dancing shoes on, get a drink and enjoy the ride: Here’s to spilled drinks, lost causes, daydreams and guitars!

Registered since over 9 years
Last login on 24 November 2022