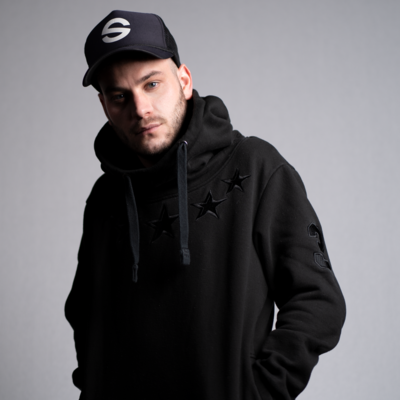 Behind the Swiss act Highland Sanctuary is the young, extremely talented musician, songwriter and music producer Simeon.
The artist from Bern, Switzerland grew up in a family of musicians. As a child he attended piano and percussion lessons and at high school he also had guitar lessons and acquired music theoretical knowledge. Afterwards, he deepened his knowledge and skills at the University of Music. As versatile as his father, who is a professional musician, Simeon taught himself other instruments such as electric bass, contrabass, banjo, alto saxophone, trumpet and tin-whistle.
It doesn’t really sound like it, but Highland Sanctuary is a one-man band. Simeon plays all the instruments himself, sings and has written all the songs himself. But not enough, he produced all songs in his own recording studio Famous Sound Productions. This concept is also consistently applied live: Highland Sanctuary presents a crazy one-man-show!
In June 2019 Highland Sanctuary released his first song “Hold Me Tight”. Since then, he inspires at concerts and his music can be heard on major radio stations in Switzerland, the Arab region, South Africa and many other countries.

Registered since over 2 years
Last login on 5 December 2021