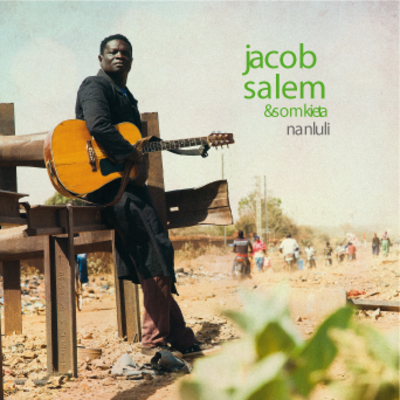 Rock, Geneva – From “The King’s Servant” to “The King of Mossi Rock”, Jacob Salem’s story has become legendary. This guitarist and singer from Burkina Faso has... Read Biography

From “The King’s Servant” to “The King of Mossi Rock”, Jacob Salem’s story has become legendary. This guitarist and singer from Burkina Faso has infused the festive and traditional Warba rhythm with the spirit and sound of blues rock.
Arranged and produced by Anglo-Swiss guitarist André “Somkieta” Courbat, the album Nanluli celebrates the fruitful fusion of two genres of music that share the same roots and the same dream of freedom.

Jacob Salem comes from a family of servants to the Mogho Naaba, king of the Mossi people, the largest ethnic group in Burkina Faso. As a child, Jacob was captivated by the music that was ingrained in everyday-life events at the royal court. He became friends with a Kunde player, who taught him the basics of this three-stringed lute. Sometimes, when the Mogho Naaba was away, Jacob would sneak into the royal night club to listen to musical masterpieces until the early hours. There he discovered the magic of James Brown, Manu Dibango the Beatles and the Rolling Stones.

At the age of 18, Jacob met a pastor who taught him to play the guitar. It was an encounter that would change his life forever. There was no doubt in his mind that this was the instrument for him, and he even persuaded his mother to buy him a guitar, an act of generosity that caused her to go into debt.

Jacob Salem then became a street musician. He eked out a living performing in bars, but his guitar playing and singing were to take on a brilliance that was quite unique. He wrote his own songs and invented Mossi rock. As both blues and Warba ternary rhythm are based on the pentatonic scale, this made for a particularly smooth blend. And so Mossi rock was born and, little by little, won the hearts of its contemporaries.

In 2013, André Courbat arrived in Ouagadougou to start a motorcycle trip through Burkina Faso. This Anglo-Swiss “guitar hero” had played for many years with Swiss rocker, Bernie Constantin, and was the pillar of many a crackling-guitar-riff-playing band. A tireless adventurer, André was always curious to meet musicians from the countries he visited. He contacted Jacob, whom a friend had told him he should meet. Less than an hour later, guitars in hand, the Mossi rocker and the Swiss rocker had started a spontaneous jamming session. The musical harmony between them was immediate. André was captivated by the quality of the melodies and the Burkinabe’s voice, while Jacob was impressed by his new friend’s guitar playing.

Back in Europe, André made every effort to have their music produced. He arranged Jacob’s songs, wrote drafts in collaboration with him and, with many trips between Burkina Faso and Switzerland, started to record the album. The first concerts were held in Ouagadougou in spring 2016.

Groove Artist Management covered the administrative aspects of the project, RFI was contacted and, enthusiastic about this multi-cultural music, decided to nominate this project in the RFI 2018 Discovery Award.

Concerts were held in France and Switzerland in summer 2017, including the Montreux Jazz Festival and the Lafi Bala Festival in Chambéry. Public enthusiasm was undeniable, showing this group’s high potential.

The release of the album Nanluli is scheduled for 25 January 2018 during a concert at the Studio de l'Ermitage in Paris, and for 26 January at the Usine à Gaz de Nyon (Switzerland).

Nanluli takes its name from a song inspired by the one a 120-year-old woman sang to Jacob when he lived at the royal court. Poetic and socially committed, these compositions derive their power from the rare and rich flavour which belongs to the Mossi tradition, enhanced by the electric intensity of a bluesy rock that gets back to its roots through this music.

Registered since over 3 years
Last login on 24 December 2018