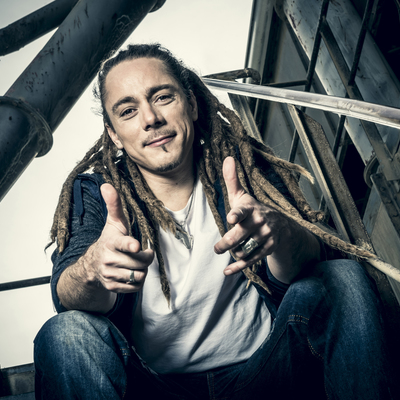 Reggae, Neuchâtel – Exceptionally active since the early 2000s the Swiss musician Junior Tshaka has been making a name for himself within the different linguistic... Read Biography

Exceptionally active since the early 2000s the Swiss musician Junior Tshaka has been making a name for himself within the different linguistic regions of his own country, thus showing that language is no barrier to sharing music. Winner of the 2009 European Reggae Contest, Junior Tshaka conveys his message around the world today, welcomed and acclaimed in all four corners of the Planet.

His first solo album, La Jungle, was produced in 2007 by Echo Productions, on the label of Sinsemilia’s Mike D’Inca. Junior Tshaka then presented it throughout France while opening for Riké.

Junior Tshaka’s charisma diffuses a Reggae of commitment and bonding. He sings out universal values with impassioned sincerity, and by simple words, addresses his convictions on the current state of the Planet. Whether with a small acoustic crew or his whole band, Junior Tshaka's concerts teem with emotion and audience interaction. Not in the least naive, but sensitive and clearheaded, he reaches his audience worldwide, no matter its origins or culture, both on large stages and in small theaters.

After several years of an international tour in 17 countries, from South America to the Maghreb, from Slovenia to the Czech Republic - even to become the first Reggae artist to perform in Iran - Junior Tshaka is now back, to begin 2013 with a third album in his own image: Boosté par le son (Boosted by the sound). For production and direction, again he chose Mike D'Inca, to resume their collaboration. Author and composer as well, Junior Tshaka is accompanied by French Reggae’s cream of the crop: the entire band of Dub Inc, some Sinsemilia musicians and Leroy Horsemouth Wallace (legendary drummer, hero of the movie "Rockers").

Unquestionably Reggae, but wholly modern, this album reflects the artist's image; aware but positive, committed but pacifist. A new chapter in Junior Tshaka's carrier thus opens today, a chapter "boosted by the sound" that begins with an 11- date tour throughout China in March 2013.