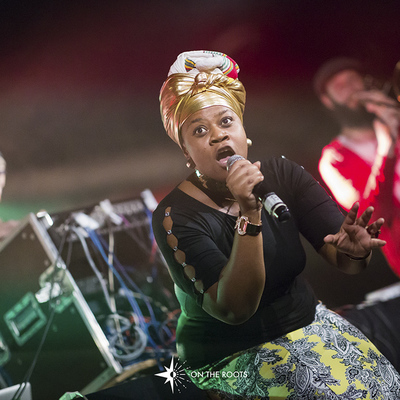 During a recent trip to Jamaica, Yves ¨Duke¨ Ducrey meets Kimmy Gold, who is introduced by her manager, Bridgett Anderson (Garnet Silk, Samory I).

Kimmy Gold is a singer and keyboardist from St Ann, the famous parish where Burning Spear, Bob Marley and Shabba Ranks were born.

Kimmy’s melodies seem to be made for the riddims freshly composed by the Duke brothers. Everything then follows naturally up.

Yves decides to produce the first album of this golden voice female singer and organizes a first session at the Mixing Lab Studio of Sly and Robbie, then a second at Flabba Holt studio.

The producer proposes then to Kimmy to come tour Switzerland with the project Duke Live Dub .

They have the opportunity to open for Earl 16 at Undertown, Geneva and are selected for the Local World Award at 5 Continents Festival, Martigny.

They also have time to finish this first album quietly in their studio.

Black Woman’s Glory is a 10 tracks debut album and is available form today as preorder on the bandcamp of the two brothers' label: Duke Production. It will be officially released on March 24 on all download and streaming platforms.

The Duke Brothers now offer a professional recording structure in a preserved spot in the heart of Swiss Alps.

Kimmy Gold was the first artist to benefit from the brothers' new concept that encompasses all stages of production, from composition to publication. Artists' residencies, accompaniment and management are also part of the services offered. The adventure is just beginning. Open to all, the site is intended to be accessible.