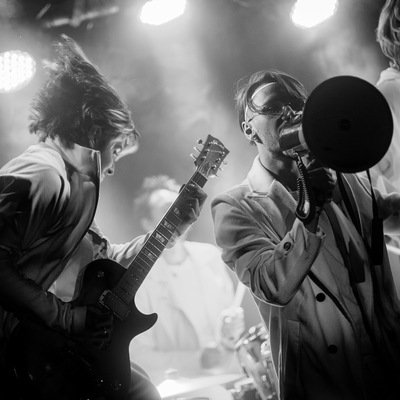 MAUVAIS SANG is a rock band based between London, Paris and Geneva. Combination of noise rock, literary songs and classical/contemporary music, they form a singular and enigmatic music fusion.

It’s in the heart of the French Alps they take their roots and give life to their unusual sound palette, responding to the surrounding mineral nature, sharp like the rocks, and deeply poetic. It’s in this setting that Mauvais Sang’s first album was created: in a chalet overlooking the ‘roof of Europe’ in Chamonix where the renowned mountain guide Cachat ‘The Giant’ was born and decided to undertake the second ascent of the Mont-Blanc in 1787. ‘Des Corps dans le Décor’ echoes those stories of light and darkness.
Between rocks and wood, crevisses and seracs, their music is a collision between Leonard Cohen and the extravagant guitar sounds of Jonny Greenwood. They mix daring saturated guitar sounds, nervous bass motives (played by Louis Dégrois) and the bright and majestuous voice of the harp (played by Marion Pozderec).
Mathis Saunier (guitarist and composer) writes the music, digging into contemporary music and modern rock while Léo Simond (singer and songwriter) brings sophisticated and mesmerizing lyrics inspired by French poetry and literature. Both started to combine their strengths to compose music more than ten years ago, when they were only 13. As for the drummer, Antoine Vercellotti, he not only delivers this obsessive beat you will find in all the tracks, he is also a talentuous graphic designer and signed the music video of the first single ‘Décor’.
Directly inspired by the eponymous film directed by Leos Carax in 1986, Mauvais Sang forges an unexpected link between arts. The film paid tribute to the creative combination of French text songs, classical music and English rock, seductively embodied by the bridge built between Serge Reggiani and David Bowie and illustrated by one of the most striking dancing scenes of the French cinema: Denis Lavant racing through the streets of Paris in a chaotic and alluring dance.
No coincidence, Mauvais Sang developed a taste for esthetic sophistication equalling Leos Carax’ perfectionism, and you will find the voice of Denis Lavant amidst the meanders of their album, like a sign of gratitude.

Registered since over 3 years
Last login on 8 October 2022