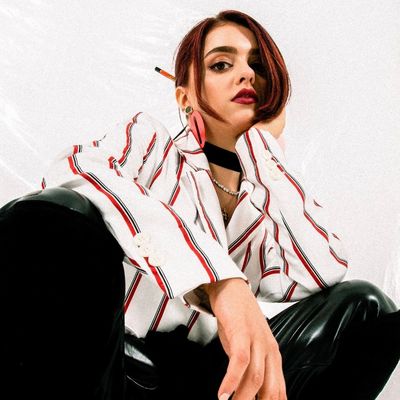 alternative, Geneva – May Roze is a swiss singer/songwriter born on the 31st of January 1996.  Growing up in a musical family, she performs on stage for the first time... Read Biography

May Roze is a swiss singer/songwriter born on the 31st of January 1996.
Growing up in a musical family, she performs on stage for the first time at just 3 years old.
She then begins singing and dancing in musicals troops at the age of 6.
Few years after, she is contracted for the role of soloist in the world premiere Oratorio "The Tower, the Flood and the Child", by Nicolas Hafner and Daniel Hameline.

For a few years, May Roze takes part of various shows in Switzerland.
In 2012, she signs with the TGIT Management Company and records 17 English and French covers at the Metropolis Studio in London and the Electric Lady Studio in New York.

In 2015, May presents to the Swiss Eurovision (Eurosong Contest 2015) the song "Letter to myself", co writted with Lise Cabble and appears in the Swiss finalists.

Since the age of 8, May Roze is improving her vocal technique with international coaches such as Stéphanie Dumouch (F), Nick Cooper (USA; vocal coach of Beyonce, Emeli Sande, Ciara, Zendaya, etc.),…

In April 2015, she moves to London and starts writing her own music.
Since 2015 and till now on she works on pop rnb singles releases as well as an album with the very talented producer-composer Load Track.

She loves to share to the public her univers and love for music.