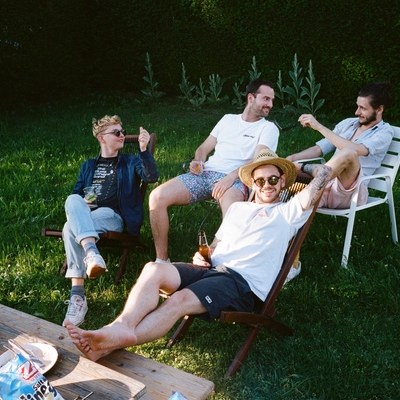 "I just want to sleep," sings front man Raphael Weidmann. The lines were written long before the pandemic tore our collective "Eat, Sleep, Rave, Repeat" shirt off our bodies. While most of the world is groaning under the imposed timeout, Messina are not that unhappy about it in some places. Finally sleep. Finally time for a hangover. The dancefloor is getting further and further away and at some point the question arises whether it was really worth it to leave sums there three times a week that would count as annual income in other regions of the world.

The members of MESSINA are the kind of people who dance at too many weddings. See and be seen. Drink and be drunk. The next day you just want to be quiet, but the beat is pumping again. We get up and the hangover disappears at the latest with the first gin and tonic. "You don't want to drink - but that's why you do it all the more", says Weidmann. "We all enjoy it on the one hand, and at the same time despise ourselves for it." Trapped in this meaningless endless loop, Messina sometimes wished someone would break their legs so that they would be forced to take a break. The pandemic has now done that. As soon as the situation returns to normal, however, you will surely be back in the old patterns and waste yourself.

With Capri Song MESSINA announce their debut album “Sponsored Post”. It will be released in autumn 2021. The production was lavish, if not to say decadent: A mid five-digit amount for a year in the studio? Eh Messina rented a room from Phil Harrison in the Winterthur Bau-2-Studios and furbished the eleven songs until they shone. Comparisons with Bilderbuch are not only useful on a textual level, the dry chopped off rhythms, the southern percussion and the shrill synths are reminiscent of the models from Vienna. The wind is also blowing from France - the tragic story of the band Her has shaped Messina for years - and from London, where they get inspiration for edgy sounds à la Foals. “Sponsored Post” does not only ask its questions in the form of music. For each song, Messina founded fictional brands that are at the center of the visual concept. On top of that there is an interactive browser game. Because: why not?

“The past few months have forced us to behave correctly in many areas,” say Messina. "And yet nothing will change." A step into a better world, but only temporarily, please. One and a half hours of startling Netflix documentary, two days to think about it. But really changing something is too exhausting. Better to just sleep.

Registered since about 3 years
Last login on 22 January 2021