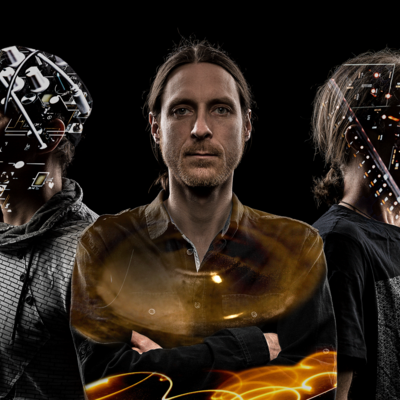 The trio from Switzerland is committed to electronic dance music. In the band's 15-year history, five albums have been released, countless concerts have been played and the band kept on fiddling with sounds and styles. Today the music oscillates between drum'n'bass, dubstep, big beat and electro. In constant change Moonshaped arrives on stage where nobody can stand still - energetically they electrify the audience and ignite the dance fire.

The band started in 2003 as a rebellious final project of Elias for the jazz school. Even crafted and blunt 'techno' (whatever that means) made the experts look a bit perplexed... The trio then worked on their sound and moved closer to the drum'n'bass with the change on drum in 2006. With their second studio album 'raw' in 2011 they won the SUISA M4Music award in the category 'electronic'.
After two years of (almost) hibernation, Moonshaped released two EPs in 2018. While on 'Phase of the Moon', once again the various subgenres of drum'n'bass were celebrated, with their second release 'Pool', the band flew far out to other spheres of electronic dance music: From electro to dub(step) to big beat... the journey even included a side glance to the roots of electronical music in the 80s.
In 2019, a tribute to the oldscool jungle followed with a remix of dancehall track by Raggabund, the band played their first international concert at the Digitalanalog Festival in Munich and started recording for the next EP in spring 2020... no spoiler, but '4-to-the-floor' has to be said.

Registered since about 15 years
Last login on 14 February 2021