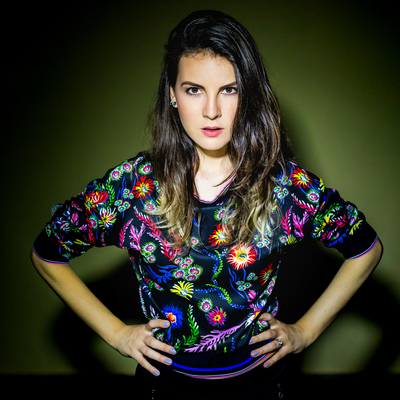 adult indie / alterna..., Zug – Born in Brazil though now based in Switzerland, Nathaje is not afraid to explore subjects that many still feel uncomfortable talking about:... Read Biography

Born in Brazil though now based in Switzerland, Nathaje is not afraid to explore subjects that many still feel uncomfortable talking about: depression, anxiety and grief, as well as lighter topics such as procrastination and living life to the full. ‘Heal’ encourages people to become more attuned to their emotions, both dark or light, and in this vein, Nathaje follows in the same sensitive singer-songwriter tradition as artists such as John Mayer, Alanis Morissette and Sara Bareilles.

Nathaje’s new album ‘Heal’ promises to do just that. It's like the musical equivalent of your grandmother’s chicken soup. Written and recorded during a period of her life in which she suffered a miscarriage and a family bereavement, ‘Heal’ was made with the express purpose of offering an aural helping hand to those who are struggling or suffering in some way. The collection of songs is intended to function as a spiritual first-aid kit, with the aim of allowing people to heal from the inside-out and to rise from the other side as a stronger and more confident person, reflective of Nathaje’s open and accepting nature.

The lead single, ‘Follow the Light’ directly confronts this modern tendency to suffocate emotions and surround oneself with noise and activity in order to remain comfortably numb, while ‘She’ argues in favour of allowing repressed or forgotten elements of your personality to run free.

The timbre of the album oscillates from the optimistic and upbeat to the melancholic and introspective, charting the peaks and troughs of the human experience through folk-inspired indie-pop ballads. That Nathaje’s voice can capture the essence of a wide range of emotions with the same impeccable depth and richness is testament to her considerable vocal talent and serves to augment the sense that you are listening to her own personal journal rendered into a full-length album. Such intimate music rarely feels this authentic, and ‘Heal’ promises to give you the space for reflection, self-discovery and, ultimately, redemption.