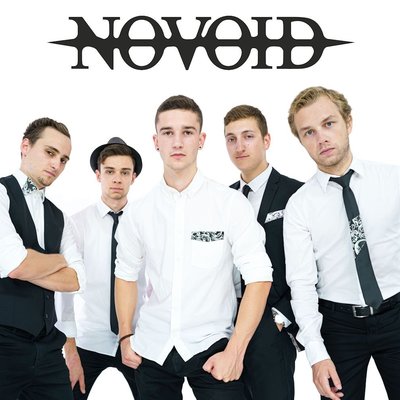 Solid Rock, St. Gallen – Loud, true, and lots of pressure to the fron. This is solid rock! „...we rock fat riffs and cool songs of today, inspired by our musical... Read Biography

Loud, true, and lots of pressure to the fron. This is solid rock!
„...we rock fat riffs and cool songs of today, inspired by our musical idols.“

NOVOID was founded in 2015 as a church band to spread „joy through music“. After several complaints regarding noise level, the 5 rock enthusiasts decide to become indepentent.
„We're now playing our own style, the mission remains the same“, says the band's founder, Philipp Keller.
Thanks to their high-energy stage presence, they are getting several appearances as well as at the „Scene Openair“ in Lustenau and qualify for the finals at the Rheintal Soundz competition 2016. Their demo album „Living In Hell“ follows.
The young musicians from the Rhine Valley rock at the RHEMA, the „Rock am Fels“, and qualify to participate in the bandXost competition in 2018. „Hard rock is far from dead, especially not in the Rhine Valley...“, so comments the magazine „Der Rheintaler".

They manage to delight the audience at Conrad Sohm as a supporting act of the world-famous British hard rock band URIAH HEEP. In autumn 2018 they release their second CD „PAINTLESS“. The band plays on several stages and qualifies again to participate in the bandXost competition. The band kicks off 2020 with a new drummer and a new rhythm guitarist and releases six new songs. In December 2020, they release their new album „ORNAMENT“. Ten songs, pure solid rock.
„The album presents itself as rich in variety, creative, virtuoso and very entertaining. This is how straight rock sounds. With lot's of pressure to the front ...“, says Christian Imhof, publisher, QULTUR magazine.

Unfortunately, all concerts are canceled due to the pandemic. The band appears at the 1st Alive Festival in Bregenz on Lake Constance, and releases the music video „Never Stop“ in 2021. NOVOID are producing Band Room Sessions, online, and are featured on the „Metal Is Forever, Rockcast Show“. With this they play their way into the hearts of the established rock community and take part during the international „Metal Is Forever Rock Marathon“.
„NOVOID's music breaks boundaries and connects people of all ages...“, says Hellfire-Franky, co-host of Metal Is Forever.

„We stay true to our mission of bringing joy through music.“
„We never Stop“ says bandleader Phil Keller.

Registered since over 3 years
Last login on 3 January 2022