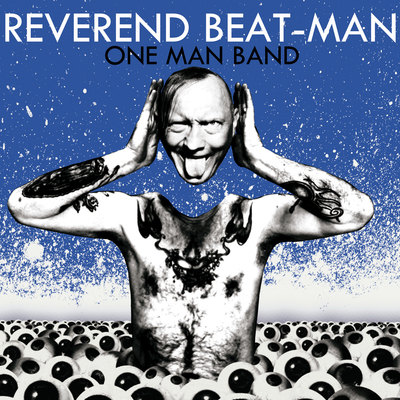 Blues Trash, Bern – SHORT INTERMEZZO "HE'LL MAKE YOUR BACK CRACK, YOUR LIVER QUIVER, AND YOUR KNEES FREEZE. AND IF YOU DON'T DIG THAT YOU'VE GOT A HOLE IN YOUR SOUL,... Read Biography

SHORT INTERMEZZO
"HE'LL MAKE YOUR BACK CRACK, YOUR LIVER QUIVER, AND YOUR KNEES FREEZE. AND IF YOU DON'T DIG THAT YOU'VE GOT A HOLE IN YOUR SOUL, SO LET'S GIVE A BIG WARM WELCOME FOR THE REV, YOUR BEAT-MAN, EVERYBODY'S BLUES TRASH PREACHER, THE FABULOUS REVEREND BEAT-MAN

SHORT DISCRIPTION
Reverend Beat-Man is a One Man Band on the Mission for Blues Trash and Wild Wild Rock'n'Roll
Born in Bern Switzerland 1967 in the Summer of Love and Hate On tour since 1992 as a One Man Band, Played Whole Europe, N+S America, Japan NZ and Australia, CBGB's, Montreux Jazz etc founder of Voodoo Rhythm Records (1992) if he would be a politician even his enemies would respect him.. on he's Live Shows seeing the Light is 100% Guaranteed, going totally berserk and dance like a maniac a Must, come in as a Sad Sweet innocent Angel and Go Home as wild Happy Crazy Rock'n'Roll Blues Trash Devil, its Not Just Music its Everything !!!

BACKGROUND:
Beat ManZeller aka Reverend Beat-Man was Born on the Countryside of Bern Switzerland (Capital Town of Switzerland) finishing Hi School then worked as Electrician until his Music Career totally took over, he is a Cultural Creator in His Hometown and in Switzerland where he won a Cultural price in 2007 and Nominated for the Swiss Music Price in 2014 for his National Cultural Work in Switzerland and outside, in 2002 he worked as Musician at the World EXPO in Switzerland, in 1998 he worked for VIVA (MTV) in Germany doing Documentaries about Wrestling Rock'n'Roll in the USA and Europe, He Plays all over the World As Musician he played in Several formations his Most Famous one is Reverend Beat-Man, One Man Band Style Blues Band Trash where he travels all around the Globe playing thousands of Shows, created his own music styles such as Primitive Rock'n'Roll or Blues Trash that has huge followings and Copycats, Reverend Beat-Man's live shows are Unique and nothing like ever seen before, it's a theatrical act combined with raw Rock'n'roll and Tradition of Blues. He Leads and plays guitar The Monsters , oneof the oldest still Existing Swiss Punk Bands or Plays main roles in the Theaters Play 'Popeye sings the blues' has Reviews in Vive Le Rock magazine MOJO magazine in England, recived radio airplay on many Major Radio Stations worldwide, even Iggy Pop's Radio Show on BBC 6 in England where Iggy even talks about the music of Beat-Man, He's playing Big Festivals such as 'Montreux Jazz Fstival' in Switzerland and Festival de Rock les Eurockéennes in France, The Bad Bonn Kilbi in Switzerland Several Times, and playing Shows all over the Globe, Whole Europe from the East to the West from the North to the South, USA, South America, Japan, Australia, New Zealand etc

HISTORY
REVEREND BEAT-MAN starting his career in 1992 under the name Lightning Beat-Man doing a one man Wrestling Rock’n’roll cabaret .. then in 2000 he died a painful death and was happily reborn as Reverend Beat-Man and since then his preaching the BLUES TRASH like no one else before him.. playing up to 200 shows a year all around the godforsaken World: Switzerland , Europe, N&S America, Japan, Australia New Zealand

QUOTES:
Hope Urban (Juxtapooz, LA Weekly)
BEAT-MAN is the Swiss head honcho of Voodoo Rhythm Records and has led that country’s premiere garage band, The Monsters, for the past 17 years. He is currently in receipt of religion, living life as a primitive gospel blues trash evangelist known as REVEREND BEAT-MAN (with a band called the Un-Believers.) “Get On Your Knees” was recorded at UK’s legendary Toe Rag Studios, with songs like “Oh Lord”, “The Lord Is Coming Back”, and others that can’t be printed here.
Seems BEAT-MAN’S musical antics go back to the 1980s when he was a attraction on the Euro trash rock scene, both as a one-man band (he plays kick drum and guitar) and wrestling show. If his conversion came via Robert Johnson and Screaming Jay Hawkins, the latest stuff on BEAT MAN’S Voodoo Rhythm label occupies a musical niche almost entirely of its own making. Three parts trash and garage, four parts voodoobilly, it's as primal as fuck and not more than a little demented. You've heard garage music but this is about as far removed from the cutesy demo antics of the White Stripes or the energetic but comparatively polite Mooney Suzuki as you can get. This is fucking w-a-a-a-a-a-a-a-y out there. THE REV was a hit at the last Las Vegas Grind, with two very sexy and nasty looking nuns, cigarettes hanging out of their mouths, surrounding him while he beat and howled music that had everyone either dropping their jaw, popping their eyes or laughing hysterically while toe tapping!

Registered since over 2 years
Last login on 11 October 2019