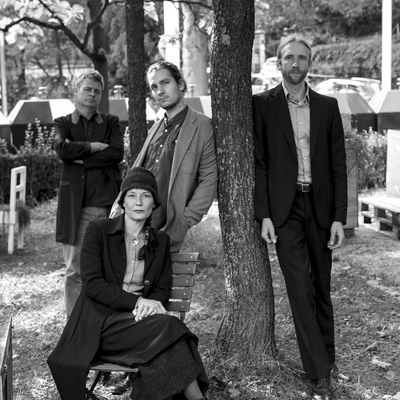 Neue Schweizer Volksm..., Bern – Fresh from their participation in the «Festival de Musica Altura» in Lima, the band’s back on our shores, with a knapsack full of impressions. The... Read Biography

Fresh from their participation in the «Festival de Musica Altura» in Lima, the band’s back on our shores, with a knapsack full of impressions. The quartet’s named after a silvery mountain range deep in the heart of Switzerland, interspersed with a myriad of caves created by the tooth of time. The majestic peaks are looking down onto the village of Muotathal, nestled in the Muota valley below which is traversed by a still untamed mountain river of the same name. The melting of impressions from a near otherworldly environment with their superb musicianship, their use of traditional instruments and unflinching loyalty to the traditions of Swiss folk are at the core of the sound of this band. Yet today, ancient songs and their soul are presented with Silberen’s sensitive and modernist approach to their own arrangements. It’s now their music, often mystical, even darkish but also jubilant and full of joy and easily touching on styles like jazz, pop and rock. Their harmonies are something to hear, led by Barbara Berger’s lucent voice, she’s a virtuoso in both jodeln, jutzen and emotional passages alike. The compositions remain simple and honest, spiritual and earthy. The themes of the songs are as vigorous as the folks living in alpine areas and tell stories of happiness and pain, the fight for freedom and independence, drink and despair. Their latest album is «Winder» and it highlights the band’s joy in just making music and their aim to shower you with their exuberance.

Registered since over 3 years
Last login on 8 March 2022