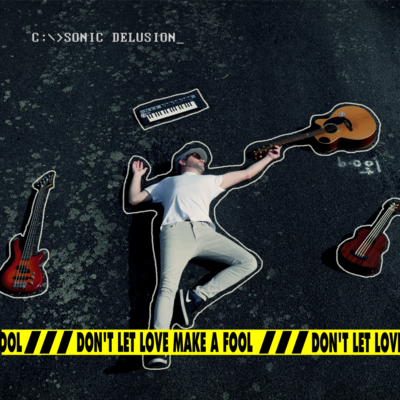 Indie Pop, Luzern – Sonic Delusion, the New Zealand-based Swiss-Kiwi is one of the original one man banders, having been looping for over ten years and still digging... Read Biography

Sonic Delusion, the New Zealand-based Swiss-Kiwi is one of the original one man banders,
having been looping for over ten years and still digging the challenge of building up a song
in front of a live audience with his latin-infused, pop-laced, funky, electroacoustic folk. A
vibrant, high-energy performer, Sonic Delusion (Andre Manella) blends dynamic layers of
rhythm, tones, bass lines and vocals, carving out his unapologetically ambitious and
intriguingly experimental sound.
He loves to exploit his too funky for folk and too folky for funk signature style, well known to
bring a live crowd to rapturous atmospheric joy. Stoking the groove with funky bass or beats
that really get the audience going, Sonic Delusion’s uniquely upbeat, a bit tongue-in-cheek,
and bursting with more funk than folk can handle, is irresistible.
Sonic Delusion kicked off his touring career in 2013 with an epic 9-month, 70-venue tour of
New Zealand, and now has over 500 gigs in New Zealand, Australia, Switzerland and
Germany, including several international festivals. Renowned for his unorthodox gig venues,
having played concerts from a purpose-built stage on the roof of his family’s housebus, a
shop roof, a lake, and multiple gigs in lounges around the country.
When he’s not on the road, Sonic Delusion is busy in his adopted home town of New
Plymouth, writing and recording albums. He’s made four so far, the first of which, +OR-
(2012) was welcomed as “a solid debut that will leave listeners intrigued and wanting more”
(NZ Musician). The second album, Open Your Eyes (2013), made good on that, with “a rich,
colorful sonic landscape full of funky bass lines, crisp, jazzy guitar riffs and warm, disarming
vocals” (NZ Musician).
In 2015, upon finishing his third album, Without Warning (2015), the idea of a liquid album
came to him - an interpretive beer that would taste like the album in beer form. Approaching
a local brewery, who took up the challenge, audiences drinking and listening to Without
Warning got to see, hear, feel and taste the music simultaneously. The album Without
Warning (2015) made it to #2 in the NZ indie album charts, and was reviewed as “a sensual
delight to the ears for anyone who enjoys folk with something a bit different” (NZ Musician).
Described as “a magical blend of folk and funk that will keep you guessing at what the next
track will offer” (NZ Musician), album four, This Material World (2017) was filled with punchy
horn lines, a driving rhythm and catchy melodic hooks. Behind the tasty bass grooves, Andre
delivered an album with a message “This Material World is about the damage people are
doing to the environment, but we’re saying, let’s not be grim and earnest about it. We can
make a positive difference to climate change and still have a dance and a good time.”
Anything Goes (2019) is the newest album, and in keeping with
Sonic Delusions’ style, Manella crafts his melody around lyrics that create a clever backdrop
of very memorable songs. Fans following Sonic Delusion are in for a sweet ride on the new
album, watch each single gathering momentum with their unapologetically funky,
electroacoustic folk experimental sound.