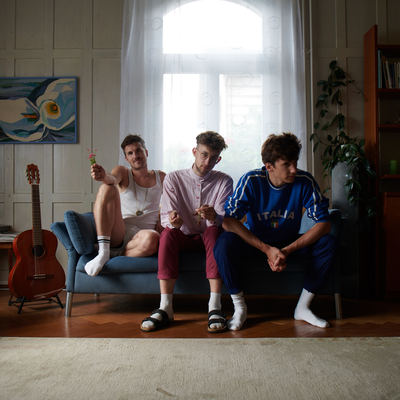 Alt Pop, Zürich – More than a year ago, Soybomb moves to Berlin with kit and caboodle. The big city becomes a new and stimulating playground with the ensemble’s... Read Biography

More than a year ago, Soybomb moves to Berlin with kit and caboodle. The big city becomes a new and stimulating playground with the ensemble’s shared flat serving as the melting pot of their musical experiences and expeditions. All the fruits of Berlin’s loom ripen the band’s sound. It becomes more mature and international as the band deals with life in the metropolis. The songs mirror the hustle and bustle of the city with an escape from the hive here and a dribbling puddle of ice cream there. Moreover, Soybomb doesn’t preserve homely allusions in their music merely for the sake of nostalgia. The band records a genuine Swiss folksong (Ländler) on their upcoming album and looks back on the “Rigi Sessions” project from the summer of 2017. Huddled up together in an alpine hut, the band reinterpreted songs by other Swiss artists such as Sophie Hunger, Odd Beholder or Pablo Nouvelle. In this spirit, the upcoming album “Jonglage” (release: February 2019) was recorded inside a grain silo within earshot of the alps.

Whether on the steep slopes of the Rigi or the imposing, stony streets of Moscow; whether in Zurich's sleepy quarters or in the middle of the Karl-Marx-Allee: Soybomb dances with mischief and euphoria over any terrain, incorporating these into their own eclectic mix. The trio manned by Andreas Achermann, Linus Gmünder, and Beda Mächler continues to impress with gutsy live performances and a determined sense of direction. For instance, complete artistic and productional autonomy was a key factor in the development of “Jonglage”. Soybomb combines songwriting, recording, and mixing processes with the band’s unique aesthetic to create a debut album smacking of independence. Despite a lot of change since Soybomb’s release of their EP “Plastic Festival” in the spring of 2017, much has remained ever the same. Linus doesn’t break a sweat keeping step in the most exuberant Berliner jam, Beda’s juggling wordplay complements his skilfully executed guitar riffs, and Achi paints the capital in every colour of his synthesizer’s palette.

Soybomb certainly have a lot more in store to get excited about: more music videos, more live performances, and more merch goodies such as a quaint set of Swiss “Jass” cards (national card game) – including a YouTube tutorial nota bene. These Swiss aren’t going to founder in the big city. Quite on the contrary, they’re keeping their boat afloat above the concrete flood of Berlin.

Registered since about 4 years
Last login on 20 January 2020