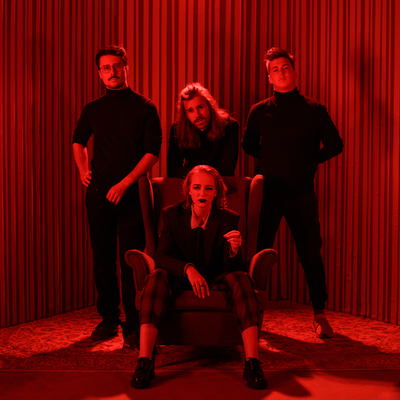 Alternative-Rock, Bern – Stay Illusion shatter the silence of our everyday lives with an innovative fusion of alternative rock and modern pop elements. The Anglo-Swiss... Read Biography

Stay Illusion shatter the silence of our everyday lives with an innovative fusion of alternative rock and modern pop elements.

The Anglo-Swiss quartet is an intense combination of guitars, bass, drums, and fresh electronic sounds. With meaningful lyrics and an emotionally gripping performance, their music will have you dancing one minute and crying the next. Inspired by British rock bands such as Nothing But Thieves, Yonaka and Muse, they tackle subjects which some might find difficult to talk about. Formed in 2017, Stay Illusion feature singer Grace Willis, guitarist Yvo Brönnimann, bassist Joel Fahrni, and drummer Sandro Portner.

The band achieved success at national and multinational contests. After 50+ live shows around the country and the release of their debut single in 2019, the band released their first EP “Our Voices Heard” in January 2021. The latter featured the single “Prove Me Wrong”, which was played on multiple Swiss radio stations. They are launching their second EP in April 2022, which will bring a new sound to the stage.

Registered since almost 4 years
Last login on 13 May 2022