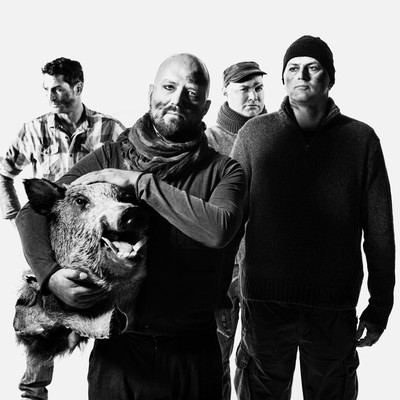 Rock, Basel-Stadt – T A Y / S O N – THE FUTURE OF CROSSOVER TAY/SON is a 4 man crossover rock band from Boston, Barcelona and Basel. The combination of american... Read Biography

TAY/SON is a 4 man crossover rock band from Boston, Barcelona and Basel. The combination of american style hard rap heavyweight KAOTIC CONCRETE and the melancholic voice and exotic flavoured guitars of HIDBER, together with MATT C.‘s swiss rock mountain approved deep bass fundament and TOMAHAWK‘s thunderous grooves with it‘s balkan-hip-hip-genes engages the band into deep‘n‘heavy yet translucent songs. TAY/SON doesn’t shy away from blending styles together, both music and lyrics combine versatility and confidence. Titles such as “El Diablo”, „God Zilla“ and “Torn” take a closer look on society and show vulnerability with their guard down.

TAY/SON – The deal with the devil

Only one who is free from fear deals with Lucifer. But in the end there’s no way around it, to hell with it. TAY/SON scales the slate of the band in this game on the ledge, with their 2nd full length Record/Album. The conquest of four individuals, standing past the prime of their lives, proves to be difficult, troublesome yet fruitful and plentiful. That is what makes them able to deal what they’ve been dealt.

The title song “El Diablo” sets the tone with dragging guitar machinery and hard rap. Music enthusiasts, who‘ve been socialized and trained musically in the 90ties such as TAY/SON, are reminded of that era’s gripping benchmark. The song’s verse is just the prelude to Hidber’s pillaresque hookline, which unfolds into a symphonic fanfare-like composition towards the last 3rd of the song. That is indeed an acoustic fusion of all elements TAY/SON is known for.

The 11 ambivalent songs breathe between style changing and dramaturgical switches. The overall strength and density in sound of guitars and groove is credited to producer V.O. Pulver (GurD, Poltergeist). The combination compliments Concrete‘s straight forward rap style and Hidber‘s spherical and atmospheric melodies, which have gained a couple of notes since their last album «Slave To Gravity», acquire a sharper focus.

The contrasting cantos reflect TAY/SON‘s state of affairs. This is the test of inner conflict. The years of adolescence are long gone, the age of seniority is decades away. Living wiser and stronger but new pitfalls are never very far away, just as love is. The group deplores the heartache and pain in “Block of Ice” or “Torn”. Is “God Zilla” more about a monster or the turning cycle of ever present life? Well, that choice is left for you – the listener – to decide. It has a slight reference to Led Zepplin‘s “Kashmir” which was most famously used by P.Diddy on the Godzilla Movie Soundtrack about Japan‘s worst nightmare turned green.

The band likes incorporating elements and snippets of known songs into their playing format. The latter was done with “Teardrop“ a Massive Attack cover song, which was on their debut album “Slave to Gravity“ and the James Bond-song “You Only Live Twice“, which featured some of their supporting fans in the music video. «You Only Live Twice» is the devil’s Bonus Track on the album with the newest rendition of the genre, “Soul Survivor“ which contains an interpolation of Aaron Neville’s «Tell it like it is». The soul of the band hasn’t lost it‘s grit with this present release. It has gained some more soul and spirit to go with it. «El Diablo» sounds demonic, and some find their purpose in sin. TAY/SON is neither demonic or angelic, the band treads the wind between the 2 extremes. “We don‘t play we win“! –– Olivier Joliat

Registered since over 9 years
Last login on 4 December 2020