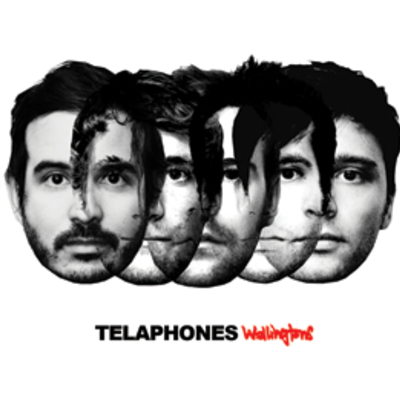 When TELAPHONES released their album Jackpot Melodies last year, Switzerland’s attention was suddenly grabbed. Never before has a band so brazenly gallivanted this country with Britpop and rarely has rock music from Switzerland sounded more resolute, thrilling and wicked.
Both media and the public are very enthusiastic about Jackpot Melodies. To this day the single K*A*T*Y is still being played on the radio. Last April TELAPHONES were even elected as Swiss Top Act, the best newcomer of the month, by the radio station DRS3. Being support acts for The Young Gods and We Are Scientists, the lads also have quite something to offer with their live appearances. An extensive club tour consisting of more than 30 performances, even brought the band all the way to the legendary Cavern Club in Liverpool, where – in earlier days – the Beatles gave countless concerts.
All these experiences have been integrated into TELAPHONES new album Unthink And Exile. Although the music has become more diverse, more intricate and more complex, the band’s strengths have not been neglected: catchy tunes, enthusiasm, passion and a good slice of Rock ‘n’ Roll. Full of boisterous fervour, the Zurich lads are headed for sunsets and shooting stars, outshining conventional Indiepop by opening somewhat psychedelic dreamrooms with washed out guitar walls, pattering drums and zealous singing.
If Jackpot Melodies would be a day trip to London in the sixties, then Unthink And Exile is a one-way ticket for the great journey to the pop universe.

Registered since over 14 years
Last login on 12 October 2009