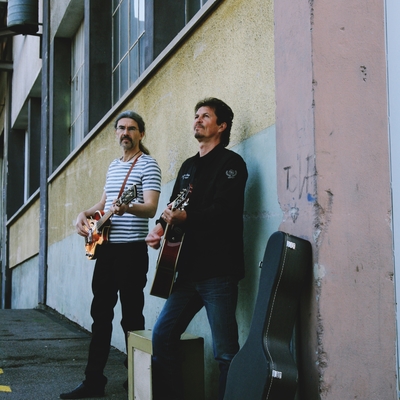 1987: The first single "Guilty" was recorded and mixed in London. It was published on "Moon Records".

1988: UNTRUE published their second single "No Hope", and started to record songs for the first UNTRUE album in their own studio.

1989: The first CD was completed in Hamburg, followed by a live tour.

1990: UNTRUE performed at many concerts/festivals in and around Switzerland, with Ueli Spörri (Nanina Gelfi Band).

1991: Various projects with other bands (The Crew, Sisiphos, Robin Banks). Recordings for the sampler album "For A Distant Corner" (Moon Records). UNTRUE contributed their song If I Only Could for this album.

1994: UNTRUE developed an entire new set of songs and performed at countless live acts in Switzerland and abroad.

1997: UNTRUE completed Under Construction, their second CD, which they introduced on a live tour in and around Switzerland.

1998: Various Gigs and Events in Germay and Switzerland.

1999: UNTRUE completed the Mystery Train album. Projects and recordings with other bands.

2000: UNTRUE introducing the new album on a live tour in Germany, Austria and Switzerland.

2002: The Recording of the Simplicissimus CD. It was first planed as a Solo-Album of Norbert Brasser, but then it becames more and more an Untrue Record, but singed in east-swiss-german.

2003: A lot of concerts with Simplicissimus, making and recording new songs maybe for the fourth album?

2004: A dream comes true! Untrue recorded a live CD on just two concerts. (and a bonus track recordet at the lengendary CBGB in New York). Wa also played a view shows in New York and Switzerland.

2013: Video "We Are THe 99 Percent" Ninety nine people from all over the world sent us their video-snippets to make the video to this song. Please make sure that you see and hear it!

Registered since over 16 years
Last login on 30 December 2022