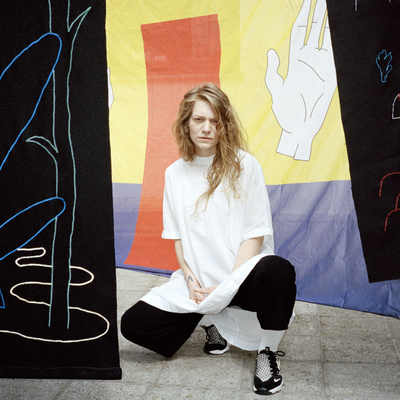 left-field pop , Vaud – VERVEINE is a music project that began with Joell Nicolas (CH) as a composer, songwriter and vocalist. Her classical background (piano) together... Read Biography

VERVEINE is a music project that began with Joell Nicolas (CH) as a composer, songwriter and vocalist. Her classical background (piano) together with a strong taste for the pop, electronic and avant-garde cultures have allowed her to build something we could name « pop of the extremes » with her machines and her voice. After a few years in Berlin and Brussels, she is back in her home country, Switzerland, flirting with new codes, in search of tension and transversality. Her work asserts its own identity and centers around an aesthetic duality, shaped both by a cerebral quest for sensation and a more visceral quest for emotion. Her sound hybridizations challenge the codes and question the limits.
After the releases of «Peaks» (2013, DKLK Records) and «Antony» (2015, Creaked Records), she first sparks the interest of the Swiss cultural actors and then half-opens the doors to European success thanks to her remarked performance at the Transmusicales de Rennes (FR), Le Printemps de Bourges (FR), MaMA Festival (FR), Iceland Airwaves (IS), Eurosonic Nooderslag (NL), Plissken Festival (GR), Zemlika (LV).
VERVEINE wins the Suisa Foundation Awards at the Demotape Clinic Electronic in Zürich in 2017. She is also one of the artists selected by the Iceberg Operation between 2014 and 2016 (cross-border support project for emerging artists led by Les Eurockéennes de Belfort and the CMA Foundation).
The release on April 3rd 2020 of the single « TOTAL CONTROL » (VRVN records, Fav Art Publishing, Believe Digital) announces her first studio album « HOTDRAMA » to be released in September 2020.

Registered since over 4 years
Last login on 7 December 2020