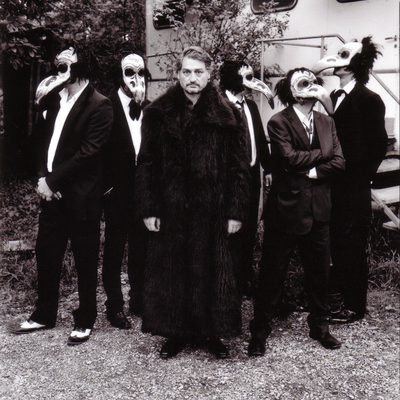 Folk/Country, Folk, Geneva – The Dead Brother's roots fetch far in musical history. They have been digging their grave for the past 20 years. Punk rock and country blues are... Read Biography

The Dead Brother's roots fetch far in musical history. They have been digging their grave for the past 20 years. Punk rock and country blues are part of their DNA. So are the stage antics of Cab Calloway, Kurt Weill's Three penny opera and the european folklore
instrumental excellency. Some members have been renovating the swiss folkloric scene for ages (Landstrichmusig, Patent Ochsner, Echo, d'Giigemaa), others have a foot in theater, comedy, cinema and Vaudeville (Stadt Theater Hannover, les Trois Suisses, 9 Volt Nelly) some are orchestra directors and some italo crooners, before all that Dead Alain played 17 years with the punk'n'roll band Les Maniacs in Geneva: all find a home for their saudade in the Dead Brothers music. They opened this Pandora's box of melting pot blues, psycho swing and acous
tic rage in 1998. Today, their sound is everywhere: inevery car ad and in every television serie. Nonetheless the Dead Brothers, and sisters, still believe in the lost world they are dreaming of.

The Dead Brothers open the grave and pull out the Tuba, Banjo, Violin, the old Hopf Guitar with the typical sixties Twang, Harmonium, Marching Drum and other obscure percussions. The Dead Brothers and Sisters go on tour in 2018 to present their new album release „Angst“. Dark Blues freaks, Rock'n'Roller, Punks, Folk and World music fans and other dodgy clientele, like musicians or circus performers have been already waiting since the last album release "Black Moose"in 2014. Now it’s time to go with “Angst” on a dramatic journey through the world of the Dead Brothers.

Band: The Dead Brothers
Album Title:Angst
Label: Voodoo Rhythm Records
Music Style: FOLK-NOIR
The newDead Brothers LP/CD „Angst“
will be released on 02.Feb 2018
.
Yes, for a good reason:
We are standing at the edge of the end of times. The catastrophy is imminent. La peur est Partout. Angst ist überall! Angst ist everywhere!
The Dead Brothers hid in the Vosges mountains, In Saintes Marie aux Mines, to take the puls of our time. The y tuned into Serge
Gainsbourg's Papillons Noirs with Rodolphe Burger and echoed traditional swiss yodels from the middle ages. With texts penned by the late Robert Walser and underground cineaste Marcus Aurelius Littler they tell 13 stories of joy, of misery and the difficulty of rmaining
human in these troubled times. Hundreds of notes by violins and tubas, banjos and wurlitzers, Cisters from Emmental and Swiss Bagpipes, a positif from the Vosgian mountains, acid guitars doing calypso and Voodoo choirs chanting along mold together in this new masterpiece by the legendary Dead Brothers.This album has rhythm. This damned rhythm was already lurking on their last album„Black Moose“, now rumbles and rolls unstopablethrough „Angst“.
Mixed by engineer Excellence Bertrand Siffert (The Young Gods, Yello) it's the Dead Brothers 7th album for the Swiss label VoodoorhythmRecords
.

Registered since over 4 years
Last login on 22 February 2018