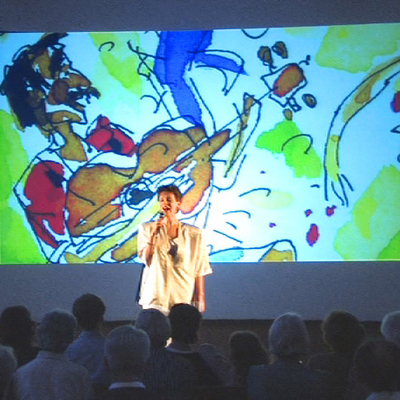 Vision of Paradise ARTCONCERT – Songs with Pictures by Ruth Juon and Evi Juon.

Enchanting Voice and colourful sparkling Pictures
Ruth Juons melodious Pop-Songs with a breeze of Classic and Jazz and Evi Juons free drawed aquarelle picture projections, lead the audience in a intriguing trip of non forseen possibilities. Ruth Juons music prepares with the light orchestra sound colours of strings, harp and fine percussion the ideal surrounding for her light and radiant voice, which flows easily from high to low ranges. Evi Juon made to the songs many aquarelle-drawings. At the computer she readapts them with all their details to video and in the concert projects it to the music on screen. In the Vision of Paradise ARTCONCERT melt the pure bright colours with the music and the voice to a paradisiacal whole.

Ruth Juon
studied classical voice at the Conservatory Zürich and Pop and Jazz at the Berklee College of Music in Boston, USA. Since then she worked as a freelance singer and composer and did concerts and recordings in Switzerland and abroad, among others with the «Kindli» Orchestra Willy Schmid, the Bigband des Hessischen Rundfunks and Eugen Cicero. Today Ruth Juon performs together with her sister out of their rich audiovisual repertory in the Vision of Paradise ARTCONCERT.

Evi Juon
studied after her apprenticeship in graphic design visual design at the University of Art and Design Zürich, Switzerland. After that she opened her own studio, did visual design and illustrated for several organisations and publishing companies. Today she draws and paints aquarelles, writes stories and makes picture books.

Vision of Paradise
Named after the same named song, 1999 Ruth Juon and Evi Juon founded their publishing company «Vision of Paradise». Besides their performing on stage, they make also Art Exhibitions and create and produce Fine Art Print-Pictures, CDs and Picture Books, where all are exhibited and available in their Vision of Paradise GALLERY.