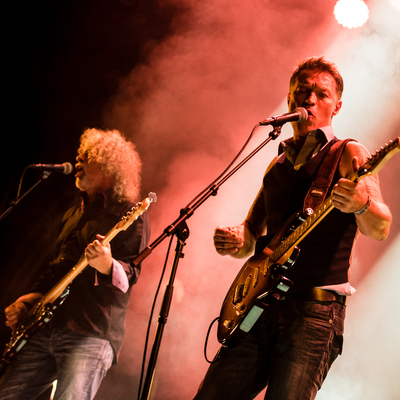 Rock, Valais – The Blues Mystery is a Swiss blues band that has 9 years and 3 studio albums under its belt. Earlier works celebrate the deep south blues with a... Read Biography

The Blues Mystery is a Swiss blues band that has 9 years and 3 studio albums under its belt. Earlier works celebrate the deep south blues with a touch of rock'n'roll and the last album „Soul Memories“ takes it a step further and adds some sexy funk and soul into the mix.

They're not your typical blues band that sticks to a 12 bar blues and you can hear the influence of the greats, such as Eric Clapton, Buddy Guy, Muddy Waters, James Brown, Fleetwood Mac, ZZ Top or the Rolling Stones.

Today, the song „Back to the Dirty Town“ is a worldwide classic for fans of blues and blues rock. It's played on countless playlists on YouTube, Spotify or radio stations by tens of thousands of people every day. You can listen to this tune and many others on the official The Blues Mystery Youtube Channel.

The first album THE BLUES MYSTERY was released in 2013, the second one - DIESEL ROCK - in 2015. The third one, titled SOUL MEMORIES, came out in 2018, preceded by a single and video clip Has Humankind Lost its Soul?.

On stage, their music and style really comes to life. They love to take in the whole stage, no matter if it is a big or small venue, they rock it all. They've mainly been playing festivals and clubs in Switzerland, Germany and France

Registered since about 10 years
Last login on 4 December 2018