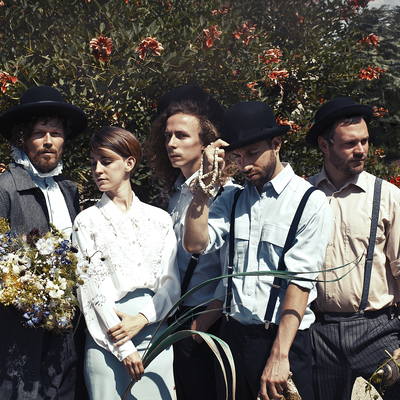 Folk/Country, Folk, Uri – Swiss singer / songwriter Mario "Moe" Schelbert gives us unique insight into his multifaceted musical universe by inviting us to join him on a... Read Biography

Swiss singer / songwriter Mario "Moe" Schelbert gives us unique insight into his multifaceted musical universe by inviting us to join him on a magical balloon ride. From on high, he directs our gaze to the Lost, the Uncomfortable, and the Unbelievable, blurring the lines between appearance and reality.

With their upcoming album, Quitter (anticipated release in fall 2018), Moes Anthill writes a new chapter of songwriting in the space between Neo-Folk and Americana: an attempt to simultaneously return to and break from local tradition that erupts like a meteor shower from out of nowhere. Moe sees the mainstream as a new world religion, and his chosen screw-up, Quitter, as the victor of the future.

The five-piece band soars with musical force and fine acoustic arrangements, leaving plenty of room for experiments and storytelling woven between Moe's resonating banjo and guitar. And in the middle of it all, quirky visual projections. In an era of disorientation and overwhelm, Moes Anthill's slogan rings clear: Everyone gets a balloon. Farewell, see you soon!

Clint McCowan:
"One can really feeling the connection with the tragic struggle of American life in the music. Moe seems to be giving these neglected places and people a voice. This representation is important for American art and intercultural understanding. Beautifully done."